Painted Personalities was created by Elaine Tindill-Rohr in 2005. We serve the Birmingham  metro area, and the surrounding region.

Elaine started face painting in college, and after graduating joined the Birmingham Jaycees. They ran a haunted house at the time and she learned the basics of special effects makeup for that project. In addition to the scary stuff, she also continued to paint the kids at different community service projects offered. In 1997, Elaine became a volunteer with a local non-profit that took clowns into hospitals, nursing homes, and schools for children with disabilities. In doing so, she found that face painting has progressed miles beyond where she has started. This was a revelation, and became the foundation for Painted Personalities. 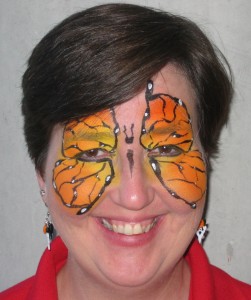 1 thought on “About Painted Personalities”